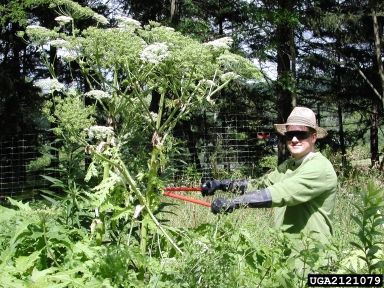 Bad news just in from CRISP -- the Catskill Regional Invasive Species Partnership: The dreaded giant hogweed plant has officially been found in Woodstock.

The invasive weed can grow up to 15 feet tall and its sap causes caustic burns on human skin. It's been advancing across the Catskills, but hadn't been found in Ulster County until now. This is not good. Here's the CRISP press release and accompanying photos:

Giant Hogweed, Invasive and Dangerous Plant in the Town of Woodstock

August 20, 2011: Giant hogweed, a non-native, noxious weed has been discovered in the Town of Woodstock —the first finding in Ulster County to date. This weed should be taken very seriously because the sap contains toxins that can cause severe skin burns and can even cause blindness. This plant is also very successful at colonizing new areas and crowding out native species.

The Catskill Regional Invasive Species Partnership (CRISP) is working with the New York State Department of Environmental Conservation’s Giant Hogweed Control Program to manage giant hogweed in the Catskills. The Giant Hogweed Control Program has crews throughout the state that are dedicated to removing the plant from public and private property free of charge. The goal is to eradicate giant hogweed from the region and eventually from the state and they are asking the public to help locate all of the plants.

It has been spread throughout the state by gardeners sharing it as a novelty ornamental plant. It’s great height – up to 15 ft, large leaves – 3 feet in diameter, and tremendous white flower heads – 2.5 feet in diameter, make it quite impressive to look at. It takes several years for the plant to go from seed to flowering plant, so there is the potential to eliminate it from sites easily if it is caught early.

If you suspect you have seen this plant use extreme caution, keep children away from it, and report it. Visit the NYSDEC Giant Hogweed website http://www.dec.ny.gov/animals/72766.html to learn how to distinguish giant hogweed from other look-alike plants. To report a giant hogweed sighting or for more information, contact CRISP at [email protected] or 845-586-2611. 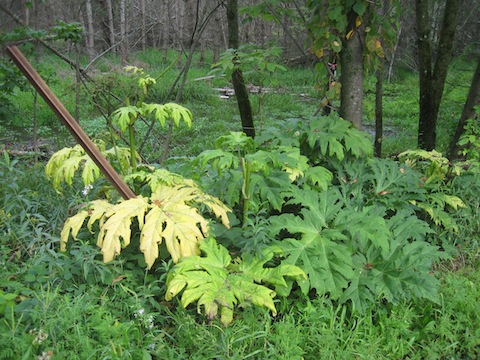