Anti-frackers from across the state are expected to rally in Albany this morning as part of a massive protest organized by a coalition of New York environmental groups. By last week, 500 people had already registered to participate, according to a press release from the Environmental Advocates of New York. 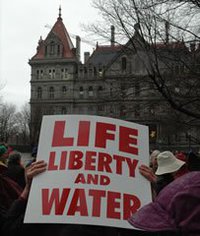 Citizens Campaign and the Catskill Mountainkeeper are two of the event's organizers, and they're asking protesters to wear blue, to "signify the need to protect New York’s water." Citizens Campaign is orchestrating appointments with Albany legislators to take place throughout the day.

Protesters are being bused to Albany to take part, the Daily Star reports:

Hundreds of fracking opponents from around New York state will be meeting with state legislators Monday, according to Adrian Kuzminski of Fly Creek, moderator of Sustainable Otsego.

"From what I've been told, the people going to Albany plan to meet with 80 percent of the state's legislators and tell them of our concerns, tell them about the science," he said. "Hundreds of people are going."

WGXC has more, including an interview with a organizer of Capital District Against Fracking.

In more fracking news, Steve Israel at the Times Herald-Record has an interview with former Department of Environmental Conservation fracking point-man Stuart Gruskin on the odds of the DEC banning fracking in the near future.

According to Gruskin, a ban isn't really in the cards:

"I haven't seen any argument that would lead me to conclude it would be prohibited. But I have heard arguments that you need enough staff to regulate it and enforce the regulations."

Photo via the Capital District Against Fracking Facebook page.