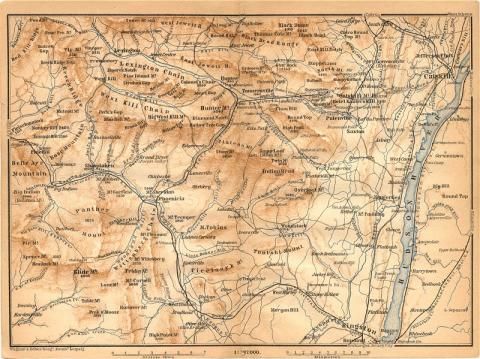 Image: A Catskills map from 1903. From livingstonmanor.net, a website devoted to Livingston Manor history.

WXXI, a public radio station in Rochester, reported yesterday that New York State Assemblyman Kevin Cahill -- whose district, the 101st, includes most of Ulster County -- is putting pressure on the DEC to have another look at its maps of floodplains, especially in the flood-battered Catskills, before finalizing its gas drilling regulations.

From the WXXI story:

The Assemblyman, whose own house in Kingston briefly became an island during tropical storm Irene, says engineers at the agency should reconsider areas that they have determined to be 100 year flood plains and therefore off limits to gas drilling. Cahill says that data, after the storms of the past two weeks, might now be out of date. He says parts of the Catskill Mountains alone have had five catastrophic flooding events in the past three years, evidence, he says that weather patterns are changing.

"We know from the past several weeks that the definition of flood planes as we know them from our maps are antiquated," said Cahill. "We need to re-map our flood plains."

Cahill is also pushing for another extension of the comment period, to allow people in places that are still disaster areas to participate. The DEC has already extended the comment period on its latest draft of regulations -- which was released on Wednesday -- from 60 to 90 days. The comment period is currently slated to end on December 12.

"These communities that may want to participate in the comment period are preoccupied," said Cahill who says they are instead "dealing with trying to help protect the lives and property of their citizens".