Personal history: My Side of Tycetonyk

Round Top Barn on the Shultis family farm in Wittenberg, Ulster County. Below, one man's memories of a childhood in the Catskills, submitted by Watershed Post reader Lawrence J. Caldwell. If you have tales of bygone Catskills to share, send them to us at [email protected]

Tycetonyk mountain existed before color. At least that’s the way I first saw it. Everything was black and white: the trees, the farmhouse, the barn, the tractor, the people, everything. Between Tycetonyk and Round Top mountains men farmed, felled trees, and fought giant rattlesnakes. These pictures fill my grandfather’s albums of family and friends who lived and worked at the farm on Cold Brook Road. He died in 1968 around the time my dad got his first color camera and my six-year-old mind could understand the difference between color and black and white. But I still didn’t understand the difference between life and death.

Tycetonyk is a small Catskill mountain, maybe 2000 vertical feet. Its broad, flat top falls away at about forty-five-degree angles to the east and west sides. The east side bears into the “flats,” a large expanse of field used over the years for grain, spotting deer at night, and, in the old days, pastureland for dairy cows. The Pitcairn’s grand summerhouse peeks out from the rise above the flats. The west side drops into a valley with Round Top on the other side forcing a small tributary into the Esopus creek. Brilliant summer thunderstorms roll up the valley between. The homestead of my godparents Harley and Isabelle Shultis and their son nestles at the base of the mountain's north face. Many evenings I lazed on my grandfather’s porch glider and watched the storms pass into a cool summer sunset. 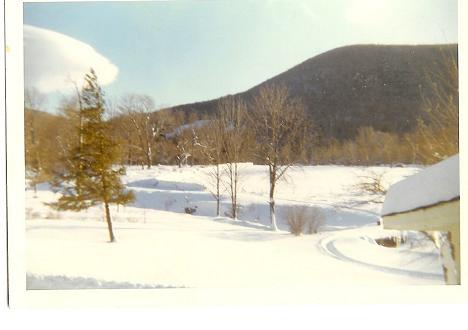 My first time up the mountain was on the back of a motorcycle. Dennis rode me up along the old logging trails that his father, my uncle Harley, cut years before. Other roads crossed higher up. One came from the valley side of the mountain, cut as an access to the shale quarry at the top. No one had been there for decades. It was nice. Quiet. Secluded. No trace of humanity except for Dennis, a Yamaha 250, and me. He told me he had seen a bobcat up there a few years before.

When I was old enough to go in the woods with Uncle Harley and Dennis, I drove the skidder up the mountain and operated the winch to pull the logs they cut. The skid pile was down at the flats where we spent the afternoon splitting sweet, seasoned oak or loading ash logs bound for the Louisville Slugger plant. After work in the summers, I jumped into the creek to cool off where my mother and grandfather both learned to swim.

We cut wood together all over the Catskills during every season. The wintertime made the phrase “a woodcutter is always twice warmed” especially memorable. That plaque hung above the old cast iron stove in Aunt Isabelle’s kitchen. The stove heated the whole house and brought special cheer to us as we huddled around the table playing cards late into the night. The memories warm me thrice.

The author at the Shultis farm

Today I can only drive by for a nostalgic look. Dennis died nearly twenty years ago. Uncle Harley’s been gone for ten. Aunt Isabelle passed on this winter. Their headstone bears the likeness of the mountain we all love. Even the tough but tender hands of a woodsman cannot stop death and unwanted change.

Some day I hope to rise up another Tycetonyk for my three sons, where they can learn the lore that I received and know the love of a special family. I can think of no better gift on earth.

Lawrence J. Caldwell lives with his wife and three sons in Medford Lakes, New Jersey. Four generations of his family summered at the Shultis farm in Wittenberg, New York. Photos contributed by Caldwell.

Sneak peek at CUBA: My Revolution