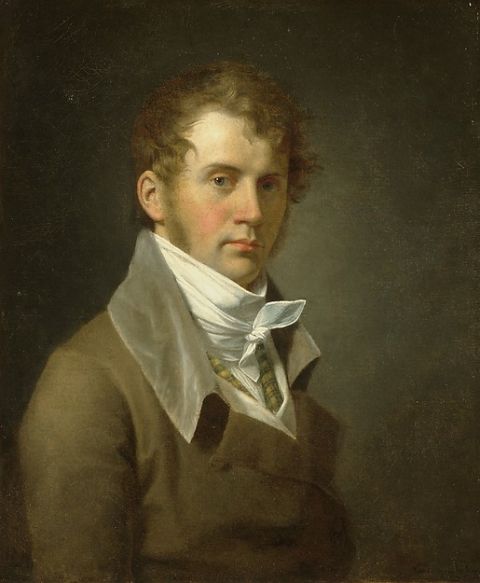 The Vanderlyn family story runs from the Dutch colony of Esopus (later Wiltwyck and finally Kingston) through the American revolution and the British burning of Kingston in 1777, up to Vanderlyn's final return to Kingston and his sad death in 1852.

Vanderlyn was the first American artist to study in France where he leaned his neoclassical techniques in the studio of Francois Andre Vincent, and where he began his pursuit of history painting. Throughout his career the need for money forced him to do portraits of the well-to-do, who could afford to have their likeness painted. His lofty aims included educating Americans to the values of high art in the European manner and opening of the first American art gallery where he exhibited several panoramas as well as his acclaimed paintings of Marius and Ariadne, along with portraits of notables like presidents Madison and Monroe. His Rotunda opened in 1819 in the expensive paladium structure he had builty on New York City Hall property.  By 1829 it was out of his hands, leaving him deeply in debt and angry at what he considered the lack of respect and support he received at the hands of other notable artists of the day like John Trumbull and Samuel F.B. Morse.

Vanderlyn never recovered financialy from the Rotunda debacle and for the rest of his life he scrambled to exhibit his work throughout the eastern United States including his 125 foot panorama of Versailles - now at the Metropoltan Museum of Art in New York City - going as far west as New Oreans and north to Montreal.

Some other notable painting Vanderlyn completed during this post-rotunda period included portraits of presidents Andrew Jackson and Zachary Taylor, a large full-length portrait of George Washington (after Gilbert Stuart) for the US House of Representatives and the Landing of Columbus, commissioned for the US Capitol Rotunda.

The John Vanderlyn documentary is now in production, and will join our Catskills/Hudson Valley history series which includes Deep Water – Building the Catskill Water System; The Catskill Mountain House and The World Around; Sweet Violets; and Rails to the Catskills.

Stay tuned for more production updates as the work proceeds.