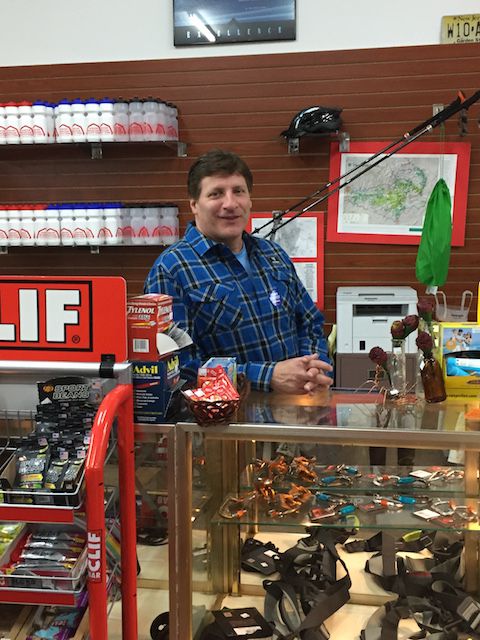 Tannersville recently welcomed a new outdoors store, Hunter Mountain Outfitters. The shop celebrated its grand opening on Memorial Day weekend, and is gearing up for its first winter season. But it’s the indoor rock wall that makes the store unique in the Catskills.

“During the winter, people get so focused on skiing and snowboarding,” said proprietor Nick Bove. “We wanted to offer another activity.”

Hunter Mountain Outfitters sells and rents skis, snowboards, snowshoes and other winter sports equipment. Its sister store, Hunter Mountain Ski and Board, is an outlet in Hunter selling overflow winter gear at a discounted price. For summer outdoor recreation, the store offers hiking, camping, winter and fishing gear, as well as apparel and outdoors accessories. It also carries and rents a wide variety of mountain bikes and specializes in bike repairs and tune ups.

The shop, located on Route 23a between Haines Falls and Tannersville, used to be Breck’s Ski Shop, which was owned by the Breck family since the 1970s. Bove purchased the building due to its location, though he was nervous about being dependent on Route 23a, which is narrow, winding and one of the only ways to get up and down the mountain. “This was a huge investment, and the road was a big ‘what if,’” Bove said. “But the Tannersville and Hunter areas are destined for progressive movement and an influx of commerce.”

There are positive aspects to being located on 23a as well. Hunter Mountain Outfitters is just a few miles from the North-South Lake Campground, as well as Kaaterskill Falls and popular swimming holes along the Kaaterskill Creek.

Bove also is in the process of working with the Hunter Foundation and Greene County to create a 30-mile multi-use trail system in the Tannersville and Colgate Lake areas. The trails are currently under construction, and are expected to open in spring 2017.

Bove serves on the board of the Windham Area Recreation Foundation (WARF), which aims to raise awareness about trail-based recreation, create bike and multi-use trails, and establish the Windham region as a preeminent four-season destination. The foundation has been a driving force behind the Windham Path, the Elm Ridge trail system and the Windham Mountain Bike Park, and is planning a mountain biking trail system on Mount Hayden.

“I had been in touch with the Hunter Foundation through the trail work in Windham, so I approached them about doing similar things in Tannersville,” Bove said. “We want to expand on what we’re doing in Windham to the other side of the mountain in Tannersville.”

Bove is no stranger to the Catskill Mountain region. He grew up in Delmar and graduated from State University of New York (SUNY) Plattsburgh. Later, he attended graduate courses at SUNY Albany, and landed a job with Sage College inside the Coxsackie Correctional Facility. He soon invested in the town, opening Coxsackie Bike and Sport in the early 1990s.

Earlier this year, Coxsackie Bike and Sport closed its doors. Like many small businesses, the shop was affected by years of competition from low online prices, with many customers looking for smaller, lower-priced items and making the larger purchases on the internet.

The American flag business fades for a Catskills fixture