An Encore Performance by Bobtown in Phoenicia on Saturday November 5th 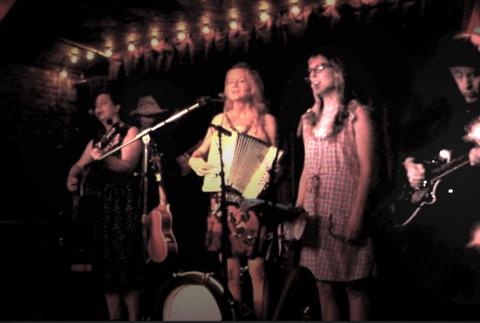 On Saturday, November 5, the dynamic Americana band Bobtown performs in Phoenicia for Flying Cat Music at the Empire State Railway Museum at 70 Lower High Street. The doors open at 7:00 p.m. and music begins at 7:30. Tickets are $15 or $13 with reservations. For information or reservations email [email protected] or call 845-688-9453.

Featuring “otherworldly, gorgeous four-part vocal harmonies” (New York Music Daily) with three albums released to date, Bobtown has already made an international splash. Their self-titled 2010 debut was reviewed as far afield as Belgium, the Netherlands, Italy, and the UK. Their second album, Trouble I Wrought, registered as one of Roots Music Report's Top International Radio Airplay Albums of 2012. And Bobtown's third and latest album, A History of Ghosts, made Roots Music Report's 2014 Contemporary Folk Chart Top 10 Albums of the Year.

You know a band is offering something a tad different if they are described as “mixing elements of country gospel, bluegrass and field hollers with an often macabre Nashville gothic tinge” (Lucid Culture) or as “a kind of pan-American collage in which the wailing of tent revivals is sometimes overlaid with urban rhythms and occasionally surreal lyrics” (Butch Kara at KZGM FM). And you know you're on a path less taken if this quote from Americana UK about Bobtown speaks to you: "If you're looking for acoustic, Gothic-folk-Americana kissed with gorgeous harmonies then look no further."

The New York Music Daily describes Bobtown as "eclectically haunting" which is particularly apt given their third release. Acoustic Live Magazine praises the “typically impeccable harmonies” present on A History of Ghosts, concluding with: “This is a superb third album from this group." The disc contains several wickedly impish songs that no doubt will help an audience reprise their Halloween holiday, but anyone who assumes that Bobtown's forte is novelty material couldn't be further from the truth. This band has more facets than a Tiffany diamond. Here is an example of one of them: a reviewer writing about Bobtown's second album in Acoustic Live noted: “Their sound has all the earmarks of a revival meeting rave-up sometime in the ’30s, with a muscular intensity and an exalting lift. The lead track of their latest album, Trouble I Wrought, “Mama’s Got the Backbeat,” gives me chills as they repeat the chorus of Mama’s got the backbeat, praise the lord...”

With four compelling songwriters, four distinctive vocalists (three of whom are women), and a wide array of instruments in play, Bobtown's sound eludes musical clichés. The band is a five-piece assemblage of diverse talent tapping into transcendent roots, with field hollers among them. Field hollers were a pre-Civil War vocal and percussive call-and-response music, thought to have pre-dated spirituals that originated with African-American slaves working in the fields. Bobtown founder Katherine Etzel credits her fascination with field hollers to her experience as a youth working in Iowa bean and corn fields. Other band inspirations run the gamut from brooding Celtic ballads to the Andrews Sisters.

Through it all, Bobtown remains incandescent, overflowing with vibrant energy, sometimes muted to a purr, other times cascading like Niagara Falls. They are returning to Phoenicia by popular demand, so make your reservations now to see Bobtown live at the Empire State Railway Museum.