Above: A 65-year-old New York City woman is dead after five tractor trailers and two passenger vehicles crashed on Route 17 in Sullivan County on Tuesday, Dec. 9. Photo by John of Catskills Photography, via Flickr.

The crash occurred in the westbound lane of Route 17 near exit 110 in the Sullivan County town of Thompson around 3:17 a.m. Tuesday morning, according to a press release issued by the State Police.

Sullivan County Commissioner of Public Safety Richard Martinkovic was on the scene of the crash on Tuesday.

The first 911 call came in at 3:48 a.m., reporting that a passenger vehicle had slid into a guardrail, Martinkovic said. A state trooper was dispatched, and then a series of other 911 calls came in, reporting that tractor trailers had become involved in the crash.

Below: A video shot by a passing driver and shared in a Sullivan County Facebook group shows the number of trailers involved.

The person who was killed was in one of the passenger vehicles, said Martinkovic, who was at the scene on Tuesday morning.

"The vehicle was so crushed that you couldn't tell what kind of vehicle it was," he said.

State Police released the identity of the woman who was killed in a press release on Wednesday, Dec. 10. Stella Sapio, a 65-year-old woman from New York City, was pronounced dead at the scene, police say.

Martinkovic said that several tractor trailer drivers were taken to Catskill Regional Medical Center to be treated for injuries.

Garbage from the tractor trailers was scattered across both sides of the highway after the crash, Martinkovic said.

"It's all over the place," he said on Tuesday.

State Police Troop F spokesman Steven Nevel said on Tuesday that ice was almost certainly a factor in the crash. Ice and snow on the edges of a large nor'easter storm bearing up to 14 inches of snow was arriving in the Catskills region at that time.

Route 17 eastbound was closed until 6 a.m., when it re-opened, Martinkovic said.

Westbound Route 17 at Exit 110 was closed for most of the day on Tuesday and a state police accident reconstruction crew was on the scene.

"There’s garbage all over the road, and accident reconstruction is there now," Nevel said on Tuesday. "When something like that happens, they try to get it open as quick as possible, but they want to make sure they cover all their bases."

In the Dec. 10 press release, the State Police said that icing conditions on Route 17 appeared to be a contributing factor in the crash. The slippery road caused the vehicles "to lose control as they attempted to negotiate a downward grade in the roadway," the press release stated.

TheTimes Herald-Record has a report and more photos from the crash scene.

Wednesday, Dec. 10 update: This story, which was originally published on Tuesday, Dec. 9, has been updated with new information.

Below: More photos from the scene via the New York State Police Facebook page. 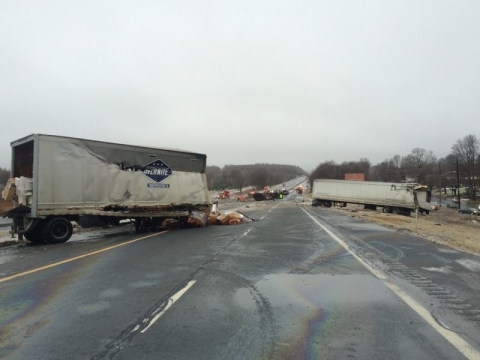