A rash of road closures coming up 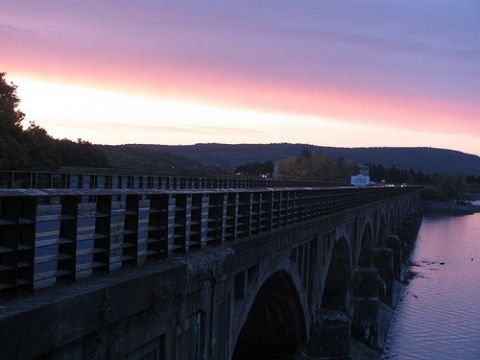 Above: Sunrise over the dividing weir that separates the Ashokan Reservoir's east and west basins. Photo by Tim Cox; shared in the Watershed Post's Flickr group pool.

'Tis the season for road work, apparently: Next week, several construction projects will require the temporary shutdown of a few Catskills roads.

The New York City Department of Environmental Protection will be closing two roads next week. Reservoir Road in Olivebridge, which runs across the dividing weir of the Ashokan Reservoir, is scheduled for a one-hour shutdown sometime on Tuesday, September 17.

According to a DEP statement, crews are replacing concrete gates beneath the roadway that are used to move water between the reservoir's east and west basins. During the shutdown, message boards at both ends of Reservoir Road will alert drivers to the construction work. Agency officials say they have alerted local officials, fire departments, law enforcement and the Onteora School to the shutdown, which will force drivers to take long detours around the Ashokan Reservoir.

The DEP is also working on a road that runs along the Schoharie Reservoir: Road 7, between Route 23 and Route 30 in Roxbury and Gilboa. The road will be closed for up to five days, beginning Monday, September 16, while crews take borings from the road in preparation for rebuilding it in 2014. Detour signs will be posted while the road is closed, and local officials have been notified.

Hardscrabble Road in Roxbury will be out of commission for several weeks while the Delaware County Department of Public Works replaces a deck on the bridge over Pleasant Valley Brook. According to a statement from the DPW, the road will be closed from 7:15am on Monday, September 16 to 5pm on Friday, September 27.

Hope springs eternal; the hopeful are wise to bring hammers and nails
If Sisyphus worked for the state DOT