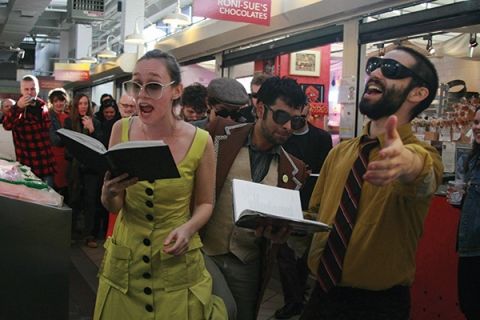 In the realm of Catskills-area arts organizations, which are more often focused on inclusiveness than innovation, Mount Tremper Arts is something of an outlier. Come June, the Summer Festival brings emerging and established experimental artists from New York City and beyond to the MTA’s headquarters near Phoenicia, fostering an environment of creative risk-taking for audiences and performers alike.

This season, founders Mathew Pokoik and Aynsley Vandenbroucke have programmed their most ambitious work yet -- one that by its very design will incorporate the communities that surround Mount Tremper. Brooklyn-based performance company Varispeed will stage "Perfect Lives," a daylong, multipart opera, in various venues in Phoenicia, Woodstock and Boiceville. Last week, a Wall Street Journal reporter tailed the five-member troupe around Ulster County, as they scouted out locations at local businesses and parks.

Penned by avant-garde composer Robert Ashley in 1983, "Perfect Lives" is a series of seven half-hour episodes tracking the events in a small town surrounding what Varispeed’s Dave Ruder describes as a "mystical bank robbery." It was originally written for television, but Varispeed adapted it into a live performance piece in 2011, bringing the show to audiences for the first time in nearly three decades. "Perfect Lives" is set in various everyday locales; this roving, site-specific production will be performed in the real-life versions of these spaces—the grocery store scene at the IGA Supermarket in Boiceville, the park scene in Woodstock’s Village Green, the church scene at Phoenicia's United Methodist Church. And best of all, it’s free -- no tickets required.

"In a way, it’s doing the opposite of theater," explains Ruder. "Theater is supposed to transport you to places. Here, you get to encounter people who are really using the supermarket as a supermarket -- and they don’t know what’s happening -- who are just like, 'Well, this is interesting.'"

Varispeed have previously performed Ashley’s opera in Brooklyn and Manhattan; taking it to the small towns surrounding Mount Tremper, where residents are less used to random art happenings than Gothamites, brings with it a whole new set of challenges. But Pokoik, who is always looking for ways to engage locals in MTA’s work, is looking forward to the opportunity to bring the festival into the community in a very real way. "There’s sometimes a head-scratching curiosity about what we do," he says. "But I think they’re very excited about this."

Attendees can drop in at any point in Perfect Lives, seeing as many (or as few) episodes as they want. If you’re unsure whether postmodern opera is your thing, dropping into a half-hour vignette is a great way to dip your toe in.

"If you like it, it’s really enriched your time and made you happy. And if you don’t, then it’ll be done really soon. There’s something kind of magical about that to me; it seems like the ideal way to experience art," says Ruder.

Pokoik believes that local audiences are more than ready for this type of work. He hopes that more organizations like MTA -- which is as much driven by the ambience of the Catskills as by the artists that do residencies at the center -- will pop up in the area.

"There are a lot of rural arts presenters who unfortunately think that because their audience is not familiar with contemporary art, they have to water things down," he says. "And we really want to reject that notion. We believe that anyone from any context can come and experience what might be a challenging work of art."

"Perfect Lives" will be performed Saturday, August 17 at various locations between 11am and 11:30pm. All events are free except the $20 Art-B-Q community dinner at 7:30pm. Visit mounttremperarts.org for details.

Jenna Scherer is an associate editor at Time Out New York. She has written on theater, art, film, music, robots and sundry goings-on for a variety of publications in New York City and Boston.