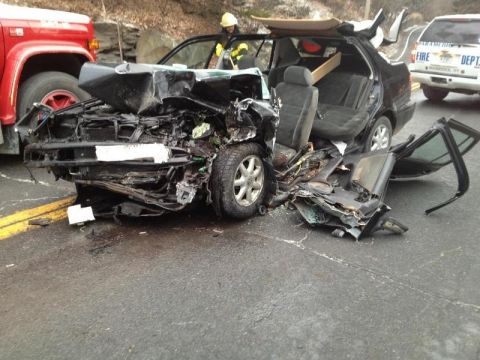 Above: The scene of a Tuesday morning head-on crash between two vehicles on Route 212 in Woodstock, near Easton Lane. Photo courtesy of the Woodstock Fire Department; reproduced by permission.

A head-on collision between two vehicles around 7:20am shut down a portion of Route 212 in Woodstock on Tuesday morning. Both vehicles -- a Volkswagen Jetta and a Chevrolet Silverado pickup truck -- were badly damaged in the crash, and the drivers had to be extricated with specialized equipment.

The Daily Freeman reports that the two drivers, both from Saugerties, were injured in the crash:

Marcus Arthur was driving a Volkswagen Jetta west on Route 212 near Zena Road when he apparently fell asleep, crossed into the oncoming lane and struck a Chevrolet Silverado pick-up truck head-on at 7:18 a.m., police said. Police said the truck was driven by Gregory Krupp, 25, of Saugerties.

Firefighters had to free Arthur from his car, and also helped Krupp from the truck, police said. Arthur was flown to Albany Medical Center with possible fractures. Krupp was taken by Woodstock Rescue to Kingston Hospital with minor injuries, police said.