This Saturday: Frank Serpico appears on stage and screen to showcase local food 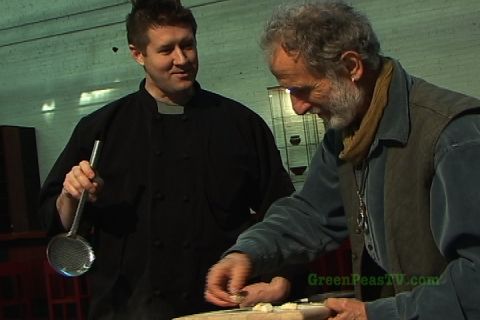 On March 31, lovers of fine local grub and real-life adventure stories will gather at one of the Hudson Valley's newest venues, the Saugerties Performing Arts Factory, for an event so quintessentially local and yet so world-class that it could only happen here.

How to follow up? Well, another thing we've got plenty of around here makes a dandy ingredient: Characters. The iconoclastic kind, the ones so individual they could be said to fulfill the function of human hot sauce in the great menu of life.

Watson's new series, “Against the Grain,” will showcase the foodie side of some of the area's most noteworthy nonconformists. For the premiere, she's picked a winner: Frank Serpico, the onetime undercover officer for the NYPD whose uncompromising honesty got him into such a dramatic peck of trouble back in the 1970s that his story was made into a movie starring Al Pacino.

Having wandered the countryside for a while, Serpico eventually settled into a low-key existence somewhere north of Poughkeepsie and south of Canada -- he prefers to keep his exact whereabouts off the radar -- and is known to indulge his lifelong passion for simple, fresh, healthy eating. Watson lured him from his lair to co-star with chef Noah Sheetz of the Hudson Valley Chefs Consortium and Robert Turner, Executive Chef of Omega Food Works.

Audience members will watch as the trio prepares such culinary delights as handmade gnocchi, winter greens salad topped with toasted goat cheese and stracciatella soup, and get to sample the results. Also co-starring will be the fine confections of Saugerties chocolatier Oliver Kita, wines from Gardiner's Whitecliff Vineyard, and all-fresh, all-local ingredients.

There are still a few seats available for the taping, at which you can expect Serpico -- who's matured into quite the eccentric mensch -- to share tasty tidbits of his life story. The event is being sponsored by Chronogram Magazine. A percentage of ticket sales from this event will be donated to Saugerties soup kitchens and pantries.

The episode will air online at greenpeastv.com.