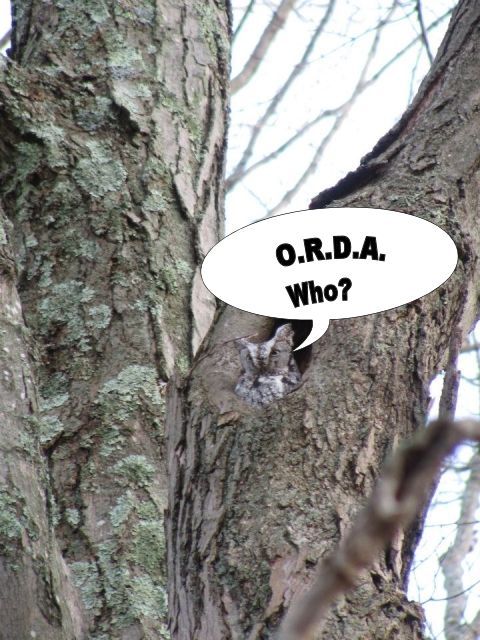 Over a dozen people tried their hand at writing a caption for this awesome photo of an Eastern Screech Owl over the weekend.

Choosing a winner was hard, but not that hard, because Pat Guido went the extra mile by having the owl ask a critical question about the mysterious new operator of Belleayre Mountain Ski Center and by actually photoshopping a caption onto the original image. Well done, Pat! Your prize, as promised, is huzzahs all around. ("Huzzah!")

Our second-place choice was a submission by Joyce Spector, who suggested that the caption be "Honey Whoo Whoo," the name of the "newest Catskill reality star."

Thanks to everyone for your caption ideas. We'll do this again sometime soon -- it was fun. Here are all the submissions:

"Did someone say binders full of women?" -- Michael Schulz

“Stay out of my Great Horned hole.” -- Ben Fenton

"It's lonely being the aerial lookout for the annual Klingons of the Northeast meeting." -- Melanie Wesslock

Don't even think about cutting down this tree. -- Sharon Brookhouse Suess

On vacation from his Hogworts day job... --Pema Wangmo

Hey, can you see me? How good's this camouflage? -- Cathie Willie

10/24/12 Correction: Joyce Spector's name was misspelled in an earlier version of this post. It has been corrected.