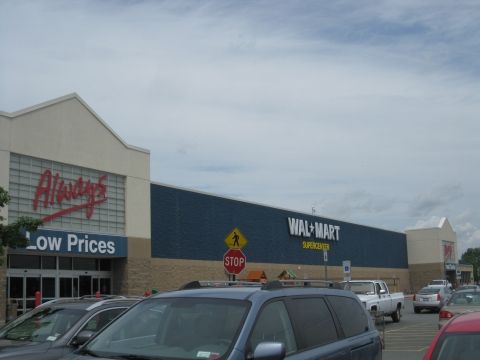 The Walmart on Anawana Lake Road in Monticello. Photo by Jason Dole.

The Monticello Walmart's vermin problem is so bad it's making national news. The superstore, which has failed four consecutive health inspections, will be at the center of a special meeting of state regulators on June 13 in Albany.

Both Business Insider and Consumerist have picked up on Walmart’s sanitary problems, as have many any other news outlets.

Kim Bhasin of Business Insider goes into detail about reports highlighting sanitary problems that date back to September 2011. Also, the article lists “critical deficiencies” sanitary inspectors found in their last two reports. Some of the findings included:

Nine pounds of food found to be rodent defiled with mouse droppings and gnaw marks. Product destroyed under signed waiver during inspection.

Over at Consumerist, Laura Northrup writes that the state inspectors have found thousands of mouse droppings and carcasses throughout the store:

Mouse feces, urine, and gnaw marks have appeared in many departments of the store, not just food. Sections with anywhere from a few to a thousand mouse droppings include: candy, soda, snack foods, canned soup, cereal, beer, dairy, cake decorating, bread, pet food, feminine hygiene, baby needs, and produce sections. Oh yeah, and a bird trapped in the store crapped on a pizza and some bread while an inspector was present.

On June 13, the Department of Agriculture and Markets has scheduled a hearing to consider revoking Walmart’s food processing license, a Times Herald-Record article states. In fact, if the store fails a fifth inspection, the store faces the possibility of being shut down entirely:

Ziehm previously indicated Walmart might be forced to close sections of the store where food is handled and processed, such as the deli, bakery and produce areas. Agriculture and Markets plans to inspect the store within the next 60 days. If the store fails a fifth inspection, the department could seek a court order to shut down the store.