Athens pumps out from tidal flooding -- and prepares for Round Two 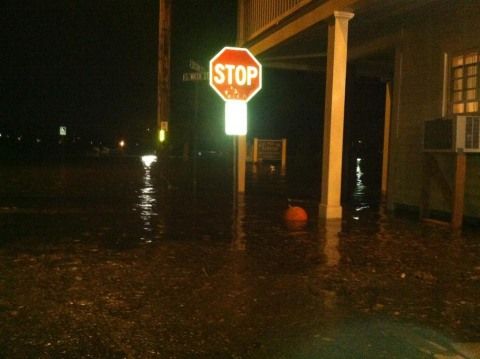 Above: Flooding on Water Street in Athens. Photo by Lila Lobdell. Reproduced by permission.

The swollen Hudson River poured into the Greene County waterfront village of Athens at high tide in the wee hours of Tuesday morning, prompting evacuations along Water Street and flooding homes and businesses.

About eight Water Street homes were evacuated, said assistant fire chief Adam Greco. A few people refused to evacuate. Residents are back in their houses now, he said, but basements are still being pumped out.

Riverside Park sustained some damage in the floods, and several restaurants -- including the Riverside Cafe and Dionysos -- were flooded. The Stewart House, which was damaged in Irene and underwent extensive renovations, also sustained some flooding.

"The way the south wind is blowing, there's a very good possibility it could happen," Proper said. "We've already done all we can do. We've sandbagged everything we can sandbag, we're just waiting. Not much else we can do."

High tide this afternoon is not expected to reach last night's levels. Greco said that no more evacuations were planned.

Proper told the Watershed Post that by his estimate, the waters early this morning were eight to ten inches higher than during the high point of Irene.

"It's the highest I've ever seen it, and I've lived here all my life," he said.

Proper said that during the night's flooding, there were four feet of water in the village wastewater treatment plant, and the water reached all the way to the parking lot of Stewart's Ice Cream across the street.

"It really didn't do a lot of damage to the inside of the plant, we were all set up with pumps. As long as we kept the doors shut we were okay," he said.

By this afternoon, Proper said he had been on duty for 24 hours in a row. Flooding is nothing unusual for the village, he said.

Below: Water being pumped out of the basement of the Stewart House. Photo by Lila Lobdell. Reproduced by permission. 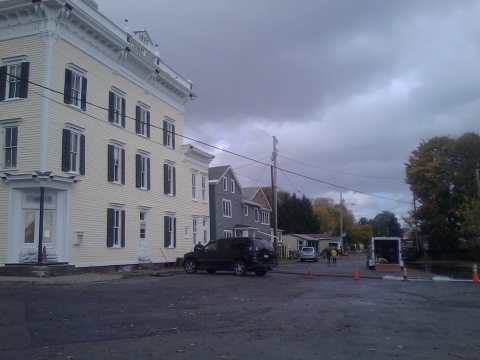