Ambulance driver responds to Route 28 accident involving his own family 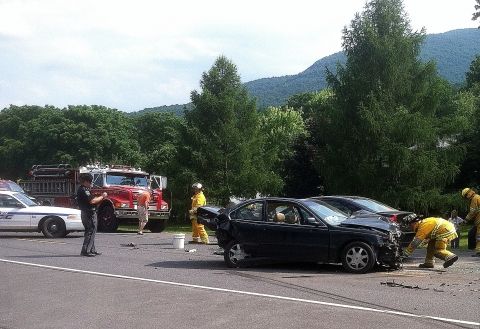 Above: First responders on the scene of a three-car collision in Shandaken on Sunday, June 10. Photo by Robert Bolten.

On Sunday afternoon, Jesse Cowan was on duty as the driver of the ambulance for the Shandaken Ambulance Service. When a call came in about an accident on Route 28 at an intersection near the Emerson Resort, Cowan felt a twinge of anxiety. The accident was a head-on collision -- and Cowan's wife and four children were supposed to be driving on Route 28 that very afternoon.

"I looked at my EMT sitting next to me and said to him, 'Oh my god, my wife and kids were on their way home from Kingston," Cowan told the Watershed Post. "I was just like, 'Wow, I hope not.'"

Cowan, a 29-year-old heavy equipment operator for the town of Shandaken Highway Department, has been a volunteer firefighter for 12 years, but only began working for the Shandaken Ambulance service in the last year. Two of his four children are under the age of five. Cowan said that finding your family at the scene of an accident is a first responder's "worst nightmare ever."

"It's always that thought in the back of your head, when your family's not home with you and a call goes out like that," he said. "And when you get there and it's not your family, it's a huge relief."

But when Cowan's ambulance arrived at the accident scene, a pullout near the Emerson, the first thing he saw was his wife's car.

In that moment, Cowan made a decision.

"Honestly, in the moment, I don't know what I was feeling. It was just like: Do I freak out? No: I don't want to be a problem. I want to be part of the solution," he said.

So Cowan scanned the scene as a professional emergency responder. He saw his wife holding his 18-month-old son. He saw his four-year-old son and his 13-year-old daughter. All appeared to be fine. Finally, he saw his eight-year-old daughter sitting in a lawn chair, responders hovering over her. She appeared injured, but not seriously.

"So I thought: OK, nobody seems seriously injured. What can I do to help more? So I continued to do my job," Cowan said.

Cowan helped load his daughter onto a backboard and into the ambulance. Then he got into the driver's seat and drove her, his wife, and one of his sons to the hospital in Kingston. (His other daughter and son were transported by other responders.)

"I didn't say a word. I didn't even take a look back," he said. "I focused on the road. I just wanted to get them to the hospital."

As it turned out, Cowan's daughter only had a small bump on her head. By Monday afternoon, she was back home with the rest of his family.

It's a miracle for an accident that involved three cars and closed down Route 28, Cowan said.

"There's no doubt in my mind that [my wife's] late father and her late uncle were looking out for her," he said. "That could've been so much worse. That was being at the worst place at the worst possible time."

Richard Muellerleile, the captain of the Shandaken Ambulance Service, said that it's unusual for an emergency responder to continue working on an accident scene when his family is involved.

"I told him, 'Ok, you're off,'" Muellerleile said. "But he wanted to drive them to the hospital."

At home the day after the accident, Cowan said the whole experience felt surreal.

Read the official accident report below:

At 3:42 PM on Sunday June 10th the Phoenicia Fire Department and Town of Shandaken Ambulance Service were dispatched to a reported head on auto accident on Route 28 in the vicinity of the Emerson Resort and Spa at 5340 Route 28. Upon arrival units encountered three vehicles involved and a total of eight persons requiring evaluation. Route 28 was briefly shut down. Two patients refused medical care at the scene and six patients were transported to The Kingston Hospital. Town of Shandaken Police, Ulster County Sheriffs Office, Ulster County Fire Coordinators Office, and Olive First Aid also assisted at the scene.