Woodstock remembers Avis Gebert, storyteller and “grandmother to the universe” 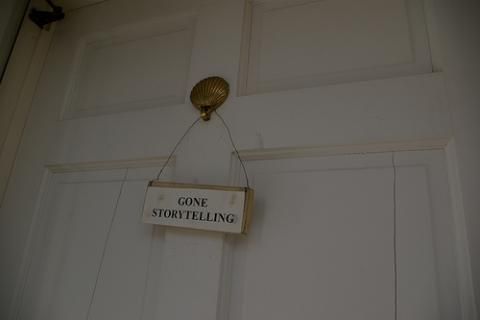 Avis Gebert insisted that she was not a natural storyteller. But “Grandma Avis,” as she was known to children throughout Woodstock, held generations of kids spellbound as she spun out her carefully crafted tales.

Gebert, who died on Wednesday at the age of 80, was one of Woodstock’s quiet legends. After a bout with ovarian cancer caused her to retire from a career as a teacher at Bennett Elementary School in 1986, Gebert found her calling as a storyteller. Masks, props, and binder after binder of carefully organized stories filled an entire “storytelling room” in her home, and children around the neighborhood spent years rehearsing and performing tales as her apprentices.

Avis Gebert in April 2011The Watershed Post interviewed Gebert earlier this year about her career as a master storyteller. Gebert said that it was a counter-intuitive calling for a shy woman from Maine.

“I was handicapped in several ways,” she said. “I was not musical. I was very shy. The only way I could tell stories was to watch the children. If I looked up at the parents, I’d freeze.”

But Gebert had discovered the power of storytelling as a third grade teacher.

“I had found when I was teaching that if I wanted to get the children’s attention, I would use my storytelling voice,” she said. “Children hear it right away, and they would settle down and get ready.”

After she left her job as a third grade teacher, she saw professional storyteller Gioia Timpanelli perform at a festival.

“I decided, ‘I want to do this, too,’” Gebert said. “I wanted to reconnect with my third graders.”

As Grandma Avis, Gebert developed a quiet, playful delivery that was riveting for children and adults alike.

“She was very close to her chest -- she really pulled people in,” said Lesley Sawhill, who manages children’s programming at the Woodstock Library.

One of Gebert’s regular tales involved a her donning a French beret and doodling on an easel with an angry mouse who was never satisfied with the resulting art. A Halloween tale involved the sudden appearance of a pumpkin head, which “always surprised some unsuspecting kid,” according to Sawhill.

Preparation was the heart of Gebert’s method. All her stories were cataloged and rehearsed, and often accompanied with props, costumes, and even staging.

Gebert's "story room"“She prepares very carefully,” said Lisa Phillips, a journalism professor at SUNY New Paltz and a friend of the family. “There’s something about the simplicity of her approach, and even the little edge of nervousness she had. It really does feel like somebody very close and relateable and not scary is telling a really good story.”

Gebert was born in 1930 in East Corinth, Maine, and moved to Woolwich, Maine, when she was two years old. After graduating from Boston University in 1951, she married Greg Gebert in 1952. They had three children, Carter, 55, Andrew, 53, and Nathan, 49.

The Geberts arrived in Woodstock in 1962, and Avis taught at Bennett between 1971 and 1986. Since her retirement, Avis devoted herself to storytelling both written and oral. In addition to telling stories at the Woodstock library and at local nursery schools and Head Start programs, she wrote a book about her extensive Maine family: “The Carters of Woolwich, Maine: A History of a Family and a Town and the Sea."

Gebert’s storytelling drew children from the Woodstock community into her home and then into her family. The Geberts count at least eight children as honorary grandchildren.

Sophie Rust with her "Grandma Avis" story book“I would go to her house, and she’d pick out a story,” Rust remembers. “I’d practice reading it without looking at the paper, and then we’d go to the library and tell the story I had rehearsed. I would wear these hats and costumes.”

Valerie Paradiz and her son, Elijah, first met Gebert at a story hour at the Woodstock Library. For Elijah, who has autism, Gebert’s story hour was one of the few places he could be around other people.

“It was very hard for him to be in places where there were other people talking,” Paradiz said. “But there was something about Avis, and he was able to stay and be there, which, back then, was huge. Literally, he could not integrate with other children. So we were alone a lot. And Avis just opened a door for both of us.”

Gebert not only told stories to children, she created intricate handmade story scrapbooks about them. Mishka, another honorary Gebert grandchild, starred in “The Adventures of Merry Mishka.” in the story, Mishka scales glaciers, becomes trapped in tulips, and befriend sea captains collaged out of magazines. For Elijah, who became part of the clan, starring in a story of his own was a major breakthrough.

“With those books, because he was in them, he could somehow process them more,” Paradiz said. “He learned from Avis by the books that she made for him.”

Gebert also nurtured the careers of a generation of writers and storytellers in Woodstock, many of whom consider “Grandma Avis’s” house a second home.

Paradiz, who lived with the Geberts with Elijah in tow for a year while writing her memoir, “Elijah’s Cup,” said that female artists were especially welcome.

“She believed in young women artists,” Paradiz said. “She would do anything to help a writer or a painter or a filmmaker.”

“We sort of have this open-door policy,” said Greg Gebert.

Laurie McIntosh, whose two children are also honorary Gebert grandchildren, has spent many nights at the Woodstock house. McIntosh, who now performs as a singer-songwriter and storyteller under the name “Story Laurie,” says that Avis is responsible for her career.

“If it weren't for Avis taking me under her wing sixteen years ago, Story Laurie may never have been born,” she said.

Lisa Phillips, the SUNY journalism professor and author of “Public Radio: Behind the Voices,” is another writer nurtured by the Geberts. Her daughter, Clara, is another honorary grandchild.

“Avis is like a grand madam of a salon,” Phillips said, recalling dinner parties and Avis’s love of introducing her proteges to each other. “It’s very motherly, too, at the same time. When I got the galley for my public radio book, I brought it over to them. Every turning point, very much in the way of a grandparent, you shared with them.”

Gebert’s passion for storytelling helped turn Woodstock into a hotbed of the ancient art. In April, several local storytellers took time out of one of their regular meetings at the Woodstock Library to talk about Gebert’s influence on them.

Jean Druffner, a retired Phoenicia Elementary School teacher, got hooked on storytelling thanks to Gebert.

“It’s part of what makes us human,” Druffner said. “I find myself forgetting myself in a place with the spirits of everyone who is there. They are in the time and place of the story. That’s when it becomes sacred.”

Lesley Sawhill, who runs New Genesis Productions in Woodstock when she is not managing children’s programming at the Woodstock Library, said that Gebert insisted that she try her hand at storytelling.

“She was the keeper,” said Jill Olesker. “She was the one who always wrote down the stories we were working on. There was this sense that someone should be documenting what we were doing, like a camera.”

Avis managed one of the most difficult tasks for a storyteller, McIntosh said: to include an unexpected twist in each of her stories.

“It’s usually humor that is being injected into it,” McIntosh said. “She just has a knack for that.”

Another of Gebert’s signature techniques was to leave her listeners with objects to remember her stories by.

“A lot of the times I’ve seen her there is some part of the story for everyone to take home,” Olesker said.

One regular “Grandma Avis” story that appeared every spring was "Daffodowndilly" by A.A. Milne. After reciting it, Gebert would hand out narrow strips of golden paper. Those golden strips are probably still scattered throughout Woodstock, with Gebert’s springtime story printed on them:

The Geberts will be welcoming visitors to their home at 4 Briarwood Lane in Woodstock during the day on Saturday and Sunday, August 20 and 21.

View a slideshow of photos of Avis Gebert and her storytelling:

"Harvest of Songs" brings lessons about Catskills farms, food and water to NYC
The Shandaken Pan-Arts Festival: Vaudeville, steampunk, and a virtuoso 7-year-old on guitar
Fun at Cabaradio