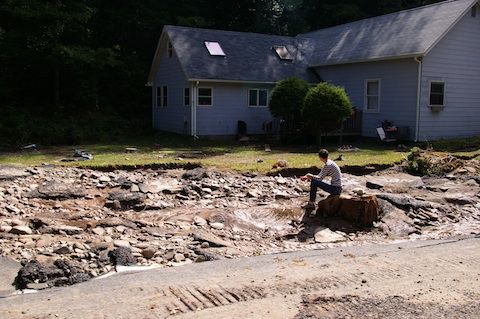 Above: A resident stranded on Oliverea Road, and video of the ravine in Rte. 47/Oliverea Road carved by floodwaters.

Yesterday, emergency responders from Ulster County, the town of Shandaken, the New York State Department of Environmental Conservation, and the New York City Department of Environmental Protection drove Julia Reischel from the Watershed Post through six miles of Oliverea Road/County Route 47, which has been cut off by landslides and washed out bridges since Hurricane Irene lashed the Catskills on Sunday. -- Ed.

Two hundred Catskills households were cut off from the outside world for three days this week after Hurricane Irene slashed at least five bridges and two crumbled landslides over stretches of remote Oliverea Road.

On Wednesday morning, Oliverea Road was still only accessible by all-terrain vehicle and rugged pickup truck. From a command post near the washed-out Hatchery Hollow bridge, emergency responders were sending out squads to  go door-to-door in the stranded parts of the road to check on residents.

Past the washed-out Hatchery Hollow bridge, residents lived in a world without power, telephone service, or reliable information.

"It's been very frustrating," said Mitch Maguire, who lives in McKinley Hollow. "We cannot connect with anybody."

"Is Phoenicia gone?" asked Flo Keahey, whose house in Oliverea, about three miles up the road, was barely missed by a landslide nearby. "Are we in a state of emergency?"

Nearby, Keahey's neighbor, Herb Van Baren, was standing in his yard near a neighbor's house, which was partially collapsed. Nearby, his wife washed clothes in a pool of water left behind by the flooding. Still, amid the destruction, he had propped up a sign for his business, Oliverea Schoolhouse Maple Syrup.

Car on Oliverea Road in Oliverea

Further up the road, sisters Gayle and Marye Yeomans rested after clambering over a washed-out bridge on Eagle Mountain Road. (See interview at bottom.)

"The bridge is still hanging off one bank, so you climb down the bridge for a while and there are some trees. You climb onto a tree and then onto some stones," said Gayle Yeomans.

For many, cars were useless here, as were cell phones. Residents travelled by bicycle or on foot.

"Our car is trapped at the house," said Jennifer Kjos, who has a house just past the bridge in Hatchery Hollow. "We're walking and biking."

Still, by hitching rides with the few cars on drivable stretches, some residents made it out.

"Monday, I came out," said Ed Moroni, who sat near Hatchery Hollow bridge with David Falcone and a dog named Basho, other strands.  "I got a ride from some guys who were leaving the last house on Burnham Road."

Beth Waterman, a woman who lives outside Oliverea in Shandaken, has been biking in every day to meet residents.

"I go up every morning and talk to people," she said.

Further up the road, at the Full Moon Resort, a wedding party that arrived on Saturday was still stranded. The guests made the best of it by throwing a makeshift party for everyone on Oliverea road.

"There were supposed to be other weddings over the weekend, but they couldn't get there," said Mitch Maguire, "So, we ate the food."

About six miles up the road, Rte. 47 suddenly disappeared into a 50-foot vertical cliff. This terrifying washout, where crumbled remains of asphalt littered the bottom of a yawning canyon, cut off Frost Valley YMCA camp and the private Winnisook Club as well as individual homes.

The ravine on Rte. 47/Oliverea Road

According to New York Times reporter Kirk Semple, who talked with Frost Valley CEO Jerry Huncosky on Wednesday, a group of 37 teenagers and eight teachers from Newark public high schools was stranded at the camp with a generator and food. The campers, teachers, and Frost Valley staff were trapped from Sunday to Tuesday, and were joined by about 40 stranded neighbors, whom they also fed. On Tuesday, camp staff managed to bus and hike their group of campers out to safety in the other direction by repairing roads themselve, Huncosky told Semple.

On Wednesday, help was visible to residents now in the form of officials buzzing by on ATVs with deliveries of medication and water. But Oliverea residents said that for the first 24 hours after the storm, there was no sign of anyone on opposite side of washed-out Hatchery Hollow bridge.

"It was scary," said Flo Keahey. "The rumor mill was flying. We were worried about looting."

"There was a day there where we didn't know if anybody was going to do anything for us," said Kjos.
Stranded on Rt.e 47/Oliverea Road past the Full Moon resort

During the day of isolation, Oliverea Road residents took matters into their own hands. Several of Keahey's neighbors commandeered excavators parked on the road and cleared part of it themselves. When emergency responders finally penetrated Oliverea Road, they cheered the civilian rescuers on.

Mike Ford and Peter Estes, two Oliverea residents, also blazed an ATV trail around the new ravine on Rte. 47 and were the first people to reach those stranded at Frost Valley and the Winnisook Club, according to Rob Stanley.

"They constructed a makeshift dirt road around the ravine and travelled by ATV to Winnisook Lake," Stanley said. "They've confirmed that Winnisook Lake is intact."

Residents of Brown Road, including an 80-year-old man, banded together and filled a depression in the street full of rocks, according to Beth Waterman.

By noon on Wednesday, a new bridge was passable to some cars and buses at Hatchery Hollow. Bob Graney, the Bridge Supervisor for Ulster County Highway and Bridge department, said that they had built the new span in 16 hours.

According to Shandaken town supervisor Rob Stanley, 95 percent of Oliverea residents had been contacted by Tuesday night. On Wednesday morning, Lt. Stephen Scherry of the Department of Environmental Conservation said that "ATV teams were going door-to-door, marking hotspots." By noon, the National Guard had arrived and was manning checkpoints throughout Oliverea, requiring that residents heading up the road sign in and out.

By Wednesday night, posters on the Watershed Post Hurricane Irene liveblog were reporting that their missing families and friends on Oliverea Road were back in touch.

Reporting from the command center on Oliverea Road

Aaron Bennett has more photos of the damage along Oliverea Road. To see them, click here.

Frost Valley YMCA has a video of the damage caused by flooding. To see it, click here.

There are many more people still stranded after last weekend's Hurricane Irene flooding in the Catskills. We are trying to track them and get the word out to emergency responders about what they need. To see our collaborative stranded persons spreadsheet, click here. To add a stranded person to the list, click here.

Correction: The residents of Oliverea Road commandeered excavators, not bulldozers. This story has been corrected to reflect that.