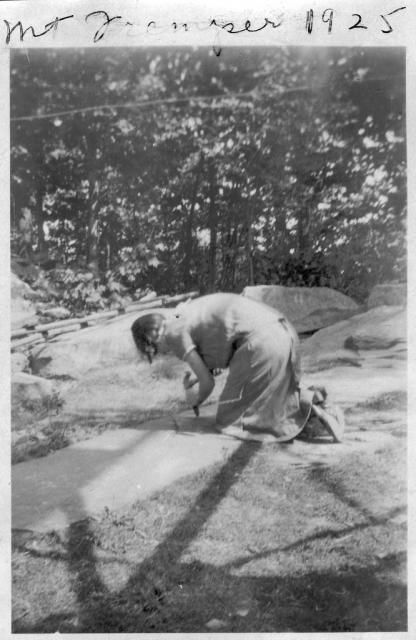 Photo from the family collection of Doc Searls, of his aunt Ethel Searls in the shadow of the Tremper Mountain Fire Tower. Reproduced by permission.

While poking around on Flickr, we recently discovered a wonderful little cache of photos from a bygone era, documenting a hike on Mount Tremper taken by a group of girls in 1925.

Pictured above is Ethel Searls, age 20, carving something into a slab with a hammer and chisel. In another shot from the photo set, Ethel's sister -- twelve-year-old Grace Searls, seated in front with the barrette -- seems to have picked more sensible hiking shoes than one of her unnamed companions. (Climbing Mount Tremper in high heels: Truly an astounding feat.)

There are a few other photos from the day's hike in a set on Flickr.

Doc Searls was kind enough to write up a bit of family history for us -- here's an excerpt from an email he sent about the photos.

Two of the four girls in the photos are sisters, Grace and Ethel Searls. Their brother Allen is my father, so these are my two aunts on my father's side.

All were born and raised in Fort Lee, New Jersey, and lived at the time at the family home on Hoyt Avenue, a stone's throw (literally) from the George Washington Bridge. At the time this photo series was taken, in 1925, the bridge was still being planned. When it was built, several years later, Allen worked on it as a cable rigger. (Sadly, the family home, and all of Hoyt Avenue, eventually fell victim to expansion of roads and services around the New Jersey end of the bridge.)

Far as I can tell, this photo series shows the only visit by that Searls generation to the Catskills...I know my father liked to go hunting and fishing in the Catskills. And our family sometimes went camping alongside Beaver Kill. It could be that the ski photos that start here were taken in the Catskills somewhere. (Belleayre, maybe?)

Ethel was born in 1905 and Grace in 1912, which means Ethel would have been about twenty years old and Grace about twelve when they took the hike up Tremper Mountain.

The photos are from Grace's collection. They were not especially sharp in the first place, and are unevenly faded, so I had to do some work with Photoshop to bring out the contrast, and to reveal some of what's going on in them.

At first I thought that the woman bent over doing something would have been Grace, because she's been an artist since she was very young; but I could tell by matching the dress in another shot that this was Ethel. It is also clear that Ethel has a hammer and a chisel (or something like one) and is etching something on a slab of rock or concrete on the ground, in the shadow of the fire tower, which means the site is on the north or east side of the tower, which is still standing -- assuming they were there between noon and mid-afternoon. I would be very interested to see if her carving in that stone is still visible today.

Ethel went on to a successful career in business, rising to the highest level of any woman in the Prudential Insurance company at that time, managing a regional office in New Jersey. (The glass ceiling was not high in those days.) She died in the early 1970s.

Grace became a well-known ceramic artist in Marlboro, New Jersey. Her "Toby" mugs (such as these) are well-represented in a Google searches for "Grace Apgar" and Toby. She is now living in Maine amidst several successive generations, and doing fine.

Hikers: Did Ethel's carving survive? If you find something that looks like the work of her chisel, send us a photo at [email protected] and we'll publish it here.