Through this weekend: Closer Than Ever at the Shandaken Theatrical Society 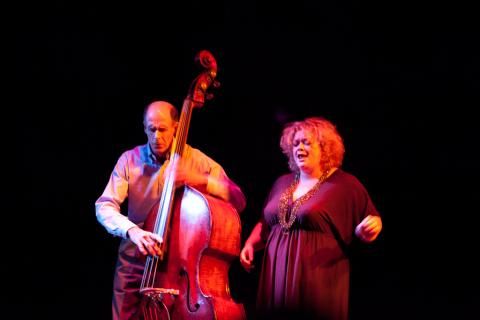 A lonely feminist divorcee, a family man wistful for the bachelor life, a woman worrying that the new man in her life will break her heart. You already know these people – and by the time the curtain drops on Closer Than Ever, you really know them.

First performed off-Broadway in 1989, the Maltby-Shire musical Closer Than Ever is an all-singing revue starring a rogue's gallery of neurotic baby boomers, played by a stripped-down cast and treading a fine line between comedy and pathos. The acutely personal repertoire works well on STS's small and intimate stage; at times, it's hard to shake the feeling that you might have stumbled into an unusually musical group-therapy session.

The five performers, three of whom are professional Equity actors (a first for the 34-year-old community theatre) are all solid singers. But it's the two women who steal the show – especially the effervescently charming Amy Wallace, who's also STS's artistic director. Whether she's seducing an upright bass in “Back On Base” or channeling the manic wrath of Nathan Lane to berate a soon-to-be-ex-boyfriend in “You Wanna Be My Friend?”, Wallace delivers the goods.

Incredibly, the cast and crew had just a week to stage and rehearse the show before opening last weekend at the Phoenicia Festival of the Voice. All of the proceeds from the show are going toward the noble goal of replacing the 123-year-old building's aging roof by wintertime – so if you go, bring a date. Or five.

Tonight: Eat, drink, and be scary in Phoenicia
Letter to the Editor: See the "Spitfire Grill"

"Into The Woods" opens in Phoenicia