Rock of ages: A (380-million-year-old) tree grows in Gilboa 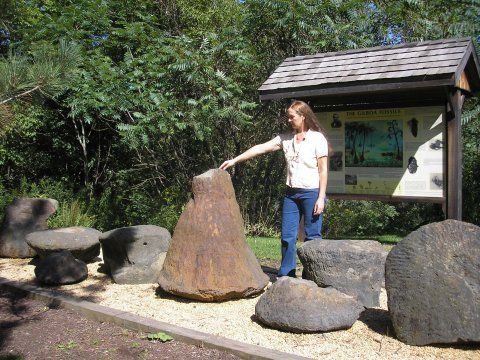 Kristen Wyckoff, the chair of the Gilboa Museum, stands next to one of Gilboa's prehistoric tree stumps. Photo by Simona David.

In the 1850s, a Gilboa minister named Samuel Lockwood, an amateur naturalist, found a sandstone cast of an ancient tree trunk in the Schoharie Creek. It was the first clue in a mystery that would not be solved for over 150 years.

Over the next century and a half, many more fossil tree stumps were found, dating back to the Devonian period, some 380 million years ago. Gilboa became known to scientists around the world for its “fossil forest.” But what did this prehistoric forest look like? With only the stumps preserved in stone, scientists could only guess.

Wattieza tree: Image from the New York State MuseumThe real breakthrough came in 2004, when a pair of paleontologists from the University of Albany made an incredible discovery in a local quarry – a complete crown from an ancient Wattieza tree, the first fossil of its kind ever to be found, and the missing clue to the tree stumps' identity.

“For 130 years we thought they were fern-trees. Since then it was discovered that they were bottle-brush trees,” says Kristen Wyckoff, chair of the Gilboa Museum.

A self-described “fossil enthusiast,” Wyckoff got involved with the Gilboa Historical Society about 12 years ago, when the Gilboa Museum was just a kiosk. (It now occupies the old school building on Stryker Road off Route 990V.)

Wyckoff talks with great pride about Schoharie County, where she grew up, got married, and raised her children. Her husband comes from a prominent local family, the Wyckoffs, who were among the first settlers of this region.

Wyckoff, who is also an artist, painted the mural – called “Devonian Dawn” -- that dominates the Museum’s exhibition room.

"Devonian Dawn": A mural by Kristen Wyckoff"Clams, armored fish -- almost all the animals at the time lived in the water,” she says. “The lung fish just started to crawl out on land.”

The painting shows a lush landscape, as Wyckoff imagined it existing at the time: all sandy soil, all hazy.

“New York State was below the Equator,” she says. “No one can really tell how the Devonian period looked like. We can only study the fossils and try to visually re-create the landscape.”

The outdoor fossil exhibit by the town hall is always open to visitors. It displays nine stump fossils leased by New York City to the Gilboa Historical Society for educational purposes. For many years, paleontologists and geologists came from all over the world to study them. One scientist, Winifred Goldring, did groundbreaking work on the Devonian fossils as a young researcher in the 1920s which led to her appointment as the first female state paleontologist of New York. (For more on Goldring, see Michele L. Aldrich's excellent paper on her work, posted below.)

Wyckoff says that she would like more people to get involved in the museum as volunteers, leading guided tours or cataloging historical objects. Money is being raised to build an addition and expand the exhibition room.

In addition to the Gilboa Fossils, the museum also exhibits old photos and artifacts from the old village of Gilboa, now a historical artifact itself. Today, most of old Gilboa is submerged under 17 billion gallons of water at the bottom of the Schoharie Reservoir.

For a town that has no actual town, we have a great community,” she says.

The Gilboa Museum is located on Stryker Road, off Route 990V, in Gilboa. The outdoor fossil exhibit is next to the town hall, on Route 990V, close to the museum. The museum is open every weekend in July and August, and by appointment the rest of the year. To make an appointment, call Kristen Wyckoff at (607) 588-9413 or e-mail at [email protected]. This weekend is the museum's last fully open one of the season, so stop by.