Home Cookin': I sort of care about you 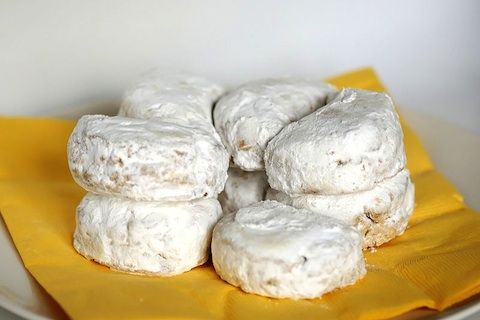 Ellen Verni has been writing "Home Cookin'," her column of Catskills recipes and rumination, for 24 years. She is sharing some of her archived columns with the Watershed Post. The column below first ran in December 2007. You can get more of Verni on her blog, at homecookincolumn.blogspot.com.

At Christmas, it’s usually the big gifts for those closest to us that are covered. But when it comes to giving that little gift of appreciation to a neighbor, co-worker or trooper who stops you when you’re speeding, then we’re stumped.

I remember one year getting a gag gift for a friend of a friend. It was one of those dumb things that made a hysterical laughing sound when prodded. (It was a long time ago; I was young.) When we exchanged gifts at a party, I opened his to me first. It was a gorgeous velvet antique jacket with ruffles and crystal buttons. Obviously, that gift exchange wasn’t one of my finest moments.

There have been close second and third least finest moments since, and now that I’ve reached that decade of wisdom (so they tell me), I stick to food.

Even if people don’t like to eat, at least they need to eat to survive. So, food is a good gift to give.

Originally, I was going to give out individual pot roasts, but they were hard to wrap, so I’ve settled on homemade jams, condiments, cookies, and little cakes.

At the beginning of December I make up a list of those I want to give a little something to at Christmas, then I assess if they’re a zucchini relish or mini lemon cake type of person. I get to work about 2 weeks before the holiday filling my list and making a few extra in case anyone holds the door for me.

If you’re leaning toward food as a token, “yes I’ve thought of you for the holidays, but not that much” gift, here are some ideas:

These are Greek cookies popular at Christmas. It’s traditional to stick a whole clove in the top to represent the gift of spices that the Three Wise Men brought to Mary. This recipe took me 10 years to acquire. My ex-sister-in-law’s mother, who was Greek, would make these every Christmas but wouldn’t share the recipe. One year I would ask, “I taste walnuts; do they have a lot of walnuts in them?” And, she would answer, “Not that much, about three-quarters of a cup.” The next year I would ask, “There’s some rum in them, right?” And she would reply, “No, it’s brandy, but only about a spoonful.” Thankfully, the marriage lasted the ten years it took me to get a list of all the ingredients. I love these cookies.

The nuts are both salty and mildly spicy, and when you bite into a dried cranberry, the sweetness is a pleasant surprise. You could substitute dried cherries, blueberries, or raisins for the dried cranberries.

Note: It is very important to add the butter to the nuts, not the other way around, as the butter will continue to cook if you leave it in the pan, and eventually burn.

Ellen Verni resides in Margaretville, and is the author of the cookbook, “The Kitchen Chronicles: From the ‘D’ Train to a Dirt Road”. Please send comments, as well as recipe suggestions or questions, to her e-mail address, [email protected]. Image by Marie-Lan Nguyen, via Wikimedia Commons.

This weekend: Santa Claus is coming to town
A 12 Days of Christmas Catskills Gift Guide