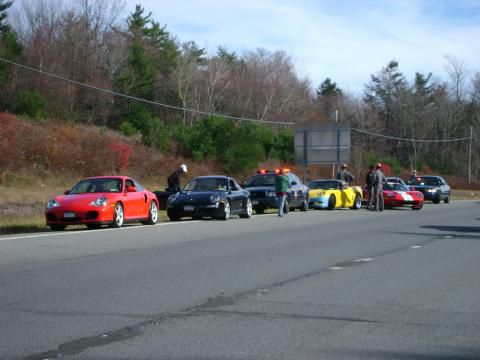 Above and below: Sullivan County Sheriff's Deputies and State Police troopers pull over a few of the scores of high-performance cars that ripped through the speed limit this afternoon. Photo provided by NY State Police.

This afternoon, local law enforcement officals has their hands full with a surprising bunch of scofflaws: over 100 drivers in Porsches, Corvettes, Vipers and BMWs who together busted through the speed limit on Rte. 17 in the town of Thompson. 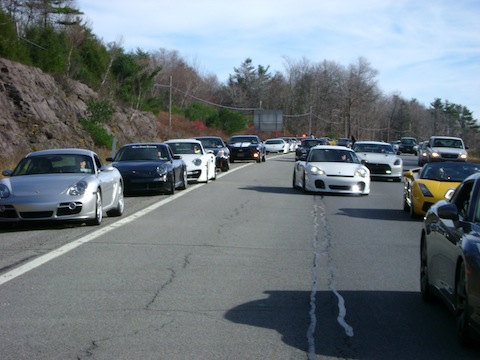 Ten cops from several state police barracks as well as the Sullivan County Sheriff's Office weren't enough to cite all the violators, according to a press release from the State Police:

NYSP Troopers out of SP Wurtsboro & SP Liberty along with deputies from the Sullivan County Sheriff Department responded to State Rte 17 in the town of Thompson after reports started flooding in that dozens of high performance cars were racing westbound on the controlled access highway. In the area of Exit 109 (Rock Hill) over 100 vehicles were pulled over by 7 Troopers and 3 deputies. Enforcement action was hampered by trying to keep the highway open & officer safety but over 30 tickets were written for speeding and safety equipment violations. The cars, including Porsches, Corvettes, Vipers & BMWs were apparently travelling as a group from the downstate Metropolitan area.

The Times Herald-Record was on the scene as well, and managed to pinpoint the cause of the impromptu motor rally as an exclusive racing club called the Monticello Motor Club:

The cars and drivers are apparently in a road rally and headed for the Monticello Motor Club at the former Monticello Airport off Route 42 near Forestburgh."We were running a little late," one driver said to a Times Herald-Record photographer when asked about the speeds at 100 mph and up.

According to a 2008 article on Alabama Live.com, the Monticello Motor Club caters to the kind of gentleman who might not care whether his Lamborghini gets a few traffic tickets. According to the story, the club caters to people worth at least $5 million who want to drive their really expensive cars really fast:

Drivers who pay the $125,000 entry fee still must pay $7,500 in annual dues. Monticello's application form asks would-be members to check one of three boxes indicating their net worth. There is no category below $5 million. This is clearly a club aimed at Wall Street types, executives and high-end professionals. Members are generally worth "north of $20 million," McMichael said.

Earlier this year, we wrote about the MMC's hopes of hosting one of the world's largest racing events. Want to know what it looks like to take the course? Here's a video of the Monticello's raceway from a Porsche: