The Sex Life of Moss! 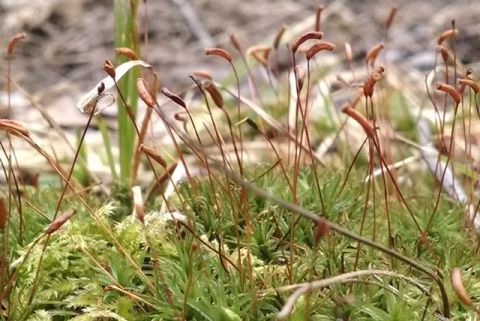 The mosses were among the first plants to live on the land, while seaweeds and freshwater algae remained in the water. But these pioneers never came to dominate the landscape in the way that the more structurally complex modern plants do. One major reason for this is that moss sex still requires water.

A clump of moss is a mass of individual plants. On the tip of each plant grows a sex cell producing organ similar in function to either ovaries or testicles. One plant will produce a male sperm producing organ in its tip. Another will have a tip that bears the moss equivalent of ovaries. When all the environmental conditions are right, including temperature as well as moisture, all the ‘male’ plants of a moss species in a particular locale are triggered to release their sperm into that film of water. The sperm, just like human sperm, use their “tails” to move, to swim over and into the egg-bearing ‘female’ plants.

A chemical signal released by the female plant is attractive to the moss sperm, which actively swims towards the pertinent female parts, guided by the signal. Fertilization then occurs and spores are formed. Spore-dispersing structures on stalks develop and release the spores during dry conditions where the spores are scattered by the wind. The shape of the spore-dispersing structure is different for each species and can be used to help identify them.

Modern terrestrial organisms such as flowering plants and your typical mammal or bird by contrast have internal fertilization; the sperm reaches the egg by direct deposit of semen or pollen, and water is no longer required for reproduction.

Check out our Blog at Root's website to learn more about gardening in the Catskills,

Contact Root Now to get your garden in shape!

Pictured below: First, the spore-bearing capsules in a different species are developing; Second, many hundreds of individual plants make up this clump of moss; Third, these capsules were produced last year and have persisted over the winter.