Mighty Mites of the Catskills and Other Little Critters! (What’s alive in the forest floor?) 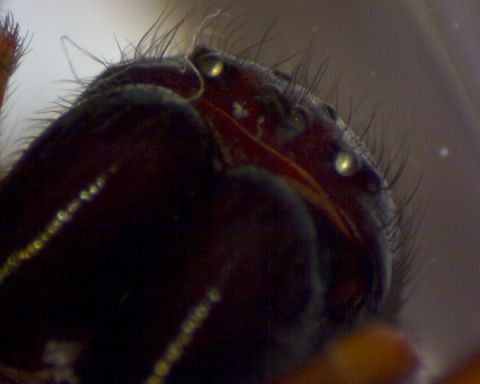 Face to face with the spider Callobius (picture above)

This last week’s snowfall made a post about spring garden flowers seem somewhat unseasonal. During the warm spell preceding the snow fall, however, I sampled some leaf litter from my backyard, and I found some interesting critters doing their thing to help break down the fallen leaves from last summer.  Many of these organisms might also be found in a compost heap. This is a whole world of creatures living out their lives, which we are not very conscious of, since this world is invisible to us.

I took about 2 cups by volume of partially decomposed leaf litter from the zone between my backyard and the surrounding woods. I processed it through a device which extracts the little critters living in it.

From 2 cups of material, I extracted specimens of the following:

Callobius a spider in the family Amaurobiidae (the Hacklemesh Weaver or White-Eyed Spiders); it builds a messy torn-up looking sheet web, beneath which it lies in a funnel web; it captures and eats critters that get tangled in its messy sheet web. It is an important predator in the leaf litter world.

Oribatid mites – very dominant in feeding on and breaking down the leaf litter; its feces are a major component of the organic  forest soil, with about a quarter of  a million individuals per square yard; probably 70% of the species are still unknown to science. These are also known as moss mites or beetle mites (because they look like little beetles).

Top and bottom view of  the soil mite Nothrus, also an oribatid mite. It  looks like a tick but actually eats rotting leaves and fungus.

The brown mite is a predator on nematodes (wormlike critters that can be garden foes or friends depending on which species they are). The brown mite also feeds on maggots and grubs, living in the leaf litter-soil interface.

Collembola are some of the most primitive insects in the Catskills; they appeared long before winged insects.

I found two different types of Collembola also known as springtails; the yellowish one is a member of the family Isotomidae; Isotomids have been known to develop really differently in response to unseasonable or extreme temperatures.

The second Collembolan here is a member of the family Poduridae. It is also known as a snow flea; podurids can be a very important component of the leaf litter, with populations  approaching 100,000 per square yard.

The flea beetle Dibolia is also known as the northern plantain flea beetle. This particular beetle eats plantain, which is considered to be a common weed in lawns. Note the large hind legs, this beetle is built for executing the high jump! You can see how small it really is here on the right pictured next to a penny for scale.

Contact Root now to get your garden in shape for spring!