“THE FIRST ARTIST IN AMERICA” JOHN VANDERLYN - MONUMENTS AND MEMORIALS 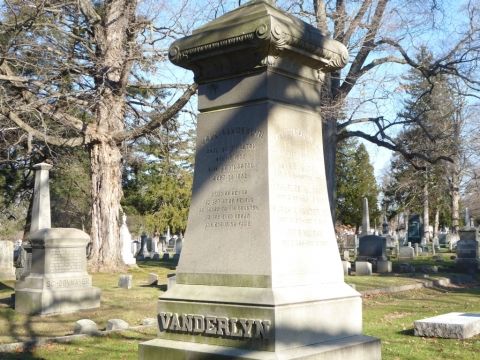 “THE FIRST ARTIST IN AMERICA”

Kingston is rich in history and has memorial markers and monuments to show it. In developing our film on the life of artist John Vanderlyn, we have discovered statues and grave markers that reveal much about the beginnings of Kingston. The area called Esopus (later Wiltwyck and finally Kingston) was spotted by Henry Hudson in his 1609 voyage upriver. Starting with Thomas Chambers and fifty settlers in the 1650's, Kingston became the third Dutch outpost along the Hudson, mid-way between New Amsterdam in the south and Fort Orange in the North.

Kingston commemorates this early history with a statue of Henry Hudson on the Academy Green and a grave-yard monument to Thomas Chambers in Montrepose Cemetery.

Kingston also remembers Pieter Styuvesant and the wooden stockade built to protect Kingston in the Esopus wars, with a statue on the Academy Green. Standing tall on the Green, Peter Stuyvesant's statue is alongside that of Henry Hudson and of another Kingston-related hero, General George Clinton, who also has a memorial in the graveyard of the Old Dutch Church in Uptown Kingston.

And, the subject of our upcoming documentary, John Vanderlyn, (1775-1852) has a fitting memorial marker in Wiltwick Cemetery, erected by his niece, Catherine. She donated many of the Vanderlyn art works and artifacts housed in the Senate House Museum collection. Vanderlyn's grandfather, portraitist, Pieter emigrated to Kingston by 1714, which still held to it's Dutch traditions well into the 19th century. John Vanderlyn was related by marriage (through his mother, Sarah Teppen) to General Clinton, who, following Vanderlyn's patron, Aaron Burr, went on to be Vice President of the United States under Thomas Jefferson and James Madison.

Taking note of one last memorial, we find the gravestone of Kingston born artist Jervis McEntee alongside that of his beloved wife, Gertrude, in the Montrepose Cemetery only a few rows removed from the Chambers marker. McEntee wrote a moving tribute to Vanderlyn, a few years after the once-famed artist died alone, broke, and despondent, back in his hometown of Kingston.

Our new documentary about the life and times of neoclassical painter John Vanderlyn, entitled, “The First Artist in America” is in post-production, and a premiere screening will be announced here upon its completion.

Check out our available films at willowmixedmedia.org.