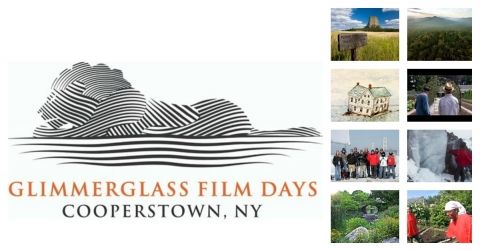 The third annual Glimmerglass Film Days, which will be held November 5-9 in Cooperstown, offers 18 films, 4 receptions, a brunch presentation, filmmaker talks, guided hikes, and a companion art exhibit. Film Days is curated by Margaret (Peggy) Parsons, founder and director of the film program at the National Gallery of Art. The selected films explore the theme “Sacred Places” and highlight places of natural and cultural significance, around the world and close to home.

Film Days, a program of Otsego 2000, makes the most of its location in Cooperstown, with screenings and events at the Fenimore Art Museum, National Baseball Hall of Fame and Museum, The Farmers’ Museum, The Smithy gallery, Cooperstown Distillery, and Templeton Hall.

Films will be introduced by Peggy Parsons, who has been on the editorial boards for The Moving Image and the Getty Trust’s Program for Art on Film, and served as a judge for key festivals including the Washington, Syracuse, and Nashville International Film Festivals.

Filmmakers and experts in their field will attend film screenings, participate in Q&A sessions following the films, and be available to interact informally with Film Days audience members.

· Nico Tille, a professor and researcher in landscape architecture and sustainable development at Delft University of Technology, will introduce “Portrait of a Garden.”

· Jane Steuerwald, executive director of the Black Maria Film Festival, will introduce selections from that Festival.

· Peter Rutkoff, Chair, Department of American Studies, Kenyon College, will offer a special brunch presentation, “The Magic and the Tragic in New Mexico” about the 1954 film “Salt of the Earth” and the 2014 short film “Silent River” (Steve Fisher and Jason Jaacks).

· More information on Film Days guest speakers and filmmakers can be found at http://www.glimmerglassfilmdays.org/events/#/guest-speakers-2015/

Evening events on November 5-8, plus a Sunday brunch presentation on November 8, offer the opportunity to enjoy local food and beverages, and interact with invited speakers and filmmakers as well as other film lovers.

On Thursday, November 5 at 5:30 pm at The Farmers’ Museum, Glimmerglass Film Days will hold a local cheese buffet with a screening of two short documentaries by photographer/filmmakers. In "Chasing Water,” National Geographic photographer Peter McBride takes an intimate look at the Colorado River watershed as he attempts to follow the irrigation water that sustains his family's Colorado ranch, down river to the sea. Nora Sweeney’s film “Sweet Oranges” is also a personal exploration, as she travels east along heads west from her house to explore the back roads off of California State Route 126, finding small, historic towns, farms, and railway tracks that evoke a dream of California’s past. The cost is $15, includes local cheese buffet and film screenings. Cash bar available.

Friday evening, after the 5:30 pm screening of “Salt of the Earth,” and just before the 9 pm film “Beasts of the Southern Wild,” the Film Days Opening Night Party and Exhibition will be held at the Smithy at 7:30 pm. Heavy hors d’oeuvres made with local ingredients and local beverages will be served. The exhibit “Personal Perspectives: Five Artists’ Sense of Place” will be on display, and offer attendees the opportunity to explore the Film Days theme of “Sacred Places” through art. Tickets are $25.

Saturday evening features a Local Food Buffet with screenings of selections from the Black Maria Film Festival. Held at Templeton Hall, 7:30 pm – 10:00 pm, the event features a screening of selected shorts from the Black Maria Film Festival (Steel Mill Rolling, A Place of Spirit, Prodigal, The Here After, Gaia, The Ballad of Holland Island House, and Umbrella House) with commentary offered by Jane Steuerwald.

Sunday, November 8 starts off with a 9:30 am brunch presentation by Peter Rutkoff, chair of the Department of American Studies at Kenyon College, who will discuss the 1954 film “Salt of the Earth”. This event, featuring a farm to table menu, will be held at Templeton Hall and costs $25.

Sunday evening features the Film Days Wrap Party at Cooperstown Distillery, along with the live auction, of the painting “Sacred Places” by Susan Jones Kenyon. Inspired by the photo featured in the Glimmerglass Film Days poster, Ms. Kenyon created a beautiful painting. Proceeds from the auction will benefit Film Days. The painting is now on display in the window of Cooperstown Classics, 81 Main Street in Cooperstown. Those who cannot attend the Wrap Party but would like to bid on the painting can submit a confidential bid to Otsego 2000, 607/547-8881.

Glimmerglass Film Days offers two opportunities to explore the area on foot. The Delaware-Otsego Audubon Society will lead a bird walk on Saturday at noon, leaving from the back patio of the Fenimore Art Museum. This bird walk, focusing on migrating shore birds, complements the 3:15 pm screening of “Rara Avis: John James Audubon and the Birds of America.” The Otsego Land Trust will lead a “Sacred Places” hike on Monday, November 9 at 10 am on 56 acres of farm fields, forest and wetland protected by the Trust. For more information or to RSVP for the Otsego Land Trust hike, please contact [email protected], 607-547-2366.

· In the Light of Reverence (Christopher McLeod and Jessica Abbe, USA, 2001, 73 minutes)

Descriptions of films and full schedule of events are available online at glimmerglassfilmdays.org.

Tickets to individual films (most films are $6 in advance, $7 at the door) and events ($15-$25) are available to purchase online at www.glimmerglassfilmdays.org.

This project is made possible with public funds from the Chenango Arts Council’s Decentralization Program, a re-grant program of the NYS Council on the Arts, with support from Governor Cuomo and the NYS Legislature.

Otsego 2000 is a not-for-profit organization founded in 1981 to protect the environmental, agricultural, scenic, cultural, and historic resources of the Otsego Lake region and northern Otsego County.

Otsego 2000 believes that the Otsego Lake region is a masterpiece of nature, and that its surrounding landscapes, valleys, villages, and farms constitute a unique confluence of historic, environmental, cultural, agricultural, rural, and scenic resources. We believe that the long-term economic well-being of the region and the quality of life for its residents derives from these resources and their stewardship. Thus, we seek to protect these attributes for the benefit of present and future generations. As no place is an island, we extend our concern and programs to the region’s larger setting in Central New York. We advance our mission through informed advocacy, public education, innovative projects, economic alternatives, and strategic campaigns.

Glimmerglass Film Days was launched in the same spirit that the launched the Cooperstown Farmers’ Market 23 years ago—to build an event that contributes significantly to local cultural life and attracts both residents and tourists to experience Main Street and the natural, cultural and historic resources in the Otsego Lake region. The mission of Glimmerglass Film Days, curated by the National Gallery of Art’s Peggy Parsons (a Cooperstown Graduation Program graduate), is to showcase exceptional independent films that explore humanity’s complex relationship with the natural world. Films and discussions explore both the natural and built environments, and include documentaries, classic features, short films and experimental films. In addition, the weekend puts an emphasis on exploring the Otsego region, with an emphasis on local foods and local spirits.

Visitors to the area as well as residents have made the first two Film Days a success, with multiple events selling out. The opportunity to view compelling films and engage in discussions of vital issues is further enhanced by the setting in Cooperstown, with its historic Main Street shops and restaurants, scenic drives and hikes, museums, and craft breweries like the nationally known Brewery Ommegang.