Dicentra Part I (Bleeding Hearts, or why do plant names change?) 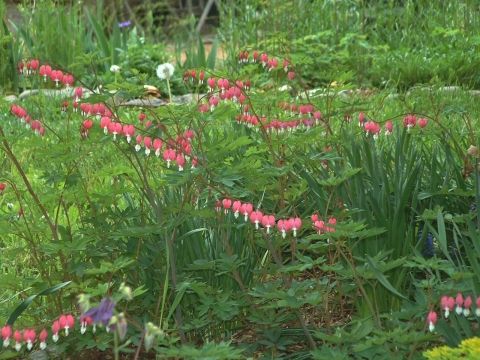 Gardeners often hate it when botanists change the names of plants, but gardeners and botanists use names differently. Gardeners use a plant name as a tag, an identifier, a way of searching on the internet.

To botanists, a plant name is rich in information.  Botanists use a plant’s scientific name to reflect the plant’s relationship to other plants and to other organisms as a whole. The name conveys to the botanist what the degree of genetic relatedness or genetic similarity is between it and other plants. When plants share a scientific name, they share an evolutionary history; they are kin. And as our knowledge of plant genealogy improves, the names change to reflect the new knowledge. It means that we are fine-tuning our knowledge of their history, and of the history of life on earth.

The bleeding heart, a very popular garden plant, bore the scientific name Dicentra spectabilis and used to be included within the genus Dicentra. (A genus is a group of closely related species all having a common ancestor). Now DNA shows that the bleeding heart is the sister to all the rest of the species in Dicentra. As the sister of Dicentra, it deserves its own name and is therefore now known to botanists as Lamprocapnos spectabile. The bleeding heart is an East Asian native, while the species in Dicentra are all North American except for one other East Asian species. The bleeding heart has leaves along the stalk bearing the flowers. In contrast, the flowers in true species of Dicentra have a leafless flower stalk. This genetic relationship suggests that the original ancestor of Dicentra, proto-Dicentra, so to speak, was a plant very much like Lamprocapnos, the bleeding heart.

Two species of Dicentra are native wildflowers in the Catskills region.  One is Dicentra cucullaria, the Dutchman’s Breeches, and the other is D. canadensis, also known as Squirrel Corn. They have a fascinating relationship with both bumble bees and ants. To find out more, check out my next blog post! And to find out what Root can do for your gardens, check out our website www.root2shootny.com!