“Personal Perspectives” at The Smithy in Cooperstown 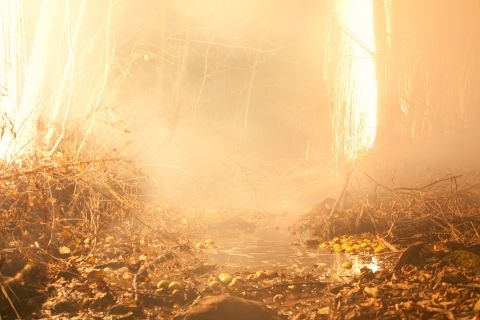 A new exhibit, “Personal Perspectives: Five Artists’ Sense of Place,” will be on display at The Smithy in Cooperstown October 31 – November 15. The featured artists, Amelia Bauer, Wijnanda Deroo, Roy Kortick, Katharine Kreisher, and Alex O’Neal, have been invited to share their interpretations of “place”—places of origin, new homes, places they visit, or places of the imagination. “Personal Perspectives” complements the “Sacred Places” theme of Glimmerglass Film Days, which will be held November 5-9.

The artists, explains exhibit curator Megan A. Irving, present their perceptions of “place” in their works as relates to humanity, nature, religion, and creative expression as it happens in imaginary places and places of significance. Irving, an artist, and co-curator Sydney L. Waller, gallerist, serve on the Steering Committee of Glimmerglass Film Days.

The exhibit is open Saturdays and Sundays, 11:00 am – 4:00 pm, October 31 – November 15, and by appointment by calling Janet Erway, Director of the Cooperstown Art Association and the Smithy, 607/547-9777. On Sunday, November 1 from 5:00–7:00 pm, there will be a reception with an informal gallery talk by Roy Kortick and Alex O’Neal moderated by James Herman; and on Sunday, November 15, 5:00–7:00 pm there will be a reception with an informal artist talk with Katherine Kreisher. Glimmerglass Film Days will hold its Opening Night Party at The Smithy on Friday, November 6, 7:30-8:45 pm. A ticket ($25) is required for the Film Days Opening Night Party, all other Exhibit events are free and open to the public. The Smithy is located at 55 Pioneer Street in Cooperstown.

Amelia Bauer's work is a series of discrete investigations into cultural conceptions of the natural world. She examines her surroundings through a lens of history and mythology. Ms. Bauer’s interventions, both photographic and sculptural, are representative of a distinctly American endeavor to bend nature to will yet also address the psychological and historical motivation underlying such efforts. A Presidential Scholar in the Arts, Amelia Bauer earned her BFA from The Cooper Union. She has exhibited nationally and internationally, at galleries including RBContemporary in Milan, Italy, De Soto Gallery and Aran Cravey Gallery in Los Angeles, Phillips de Pury Shop and Capricious in New York, and Helen Pitt Gallery in Vancouver, BC. Her work has been exhibited at institutions including The Walker Art Center, CoCA Seattle, CCA Santa Fe, The Museum of New Mexico, and the National Gallery of Art. Her work is in the permanent collections of The Albuquerque Museum and SFMOMA. The Paris Opera is currently using images from her series Burned Over as their institutional identity for the 2015/16 season.

Photographer Wijnanda Deroo does not limit herself to the known—in fact, she seems to search out the unknown and unfamiliar. As Ken Johnson of the New York Times notes, Ms. Deroo's photographs have a curious searching quality... as though she were a detective. While her photographs can be of fairly quotidian spaces—waiting rooms, courtyards, a kitchen, abandoned spaces in Sharon Springs’ resort hotels—the interplay she produces between her chosen subject matter and color, light and composition transforms each space into a thing of startling uniqueness. Born in The Netherlands, Ms. DeRoo earned a Liberal Arts Degree from the Academy of Fine Arts, in Arnheim, NE, where she continued as a professor at the Academy as well as at The Academy of Fine Arts in Breda, NE. She currently lives and works in Amsterdam (Neth.) and New York.

Roy Kortick is inspired by the symbols of divinity and power from cultures and art throughout history. Kortick works primarily in glazed ceramic tiles which are handmade, rolled, or stamped and combined into handmade egg tempera painted panels Kortick was born in Providence, Rhode Island, and received a B.A. in Visual Arts and Literature from Bennington College. Mr. Kortick’s work has been shown in numerous solo exhibitions worldwide, and is currently represented by the Thordén Wetterling Gallery in Gothenburg, Sweden. His work has been written about in the New York Times and Newsday among other publications. His awards include fellowships at The MacDowell Colony, The Millay Colony for the Arts and Vermont Studio Center. Formerly from Brooklyn, Kortick lives in Middlefield, NY where he operates a small permaculture farm that heavily influences his work.

Katharine Kreisher’s autobiographical work centers on highly manipulated photographic images and photo-etchings. Her photos in this exhibit are set in Sharon Springs. Ms. Kreisher earned M.F.A. and MA degrees at The University at Albany and a B.S. at Skidmore College. A professor at Hartwick College, she teaches documentary photography, alternative processes and photo-related printmaking methods. Ms. Kreisher has participated in numerous exhibitions including "Hair" curated by Alison Ferris for the John Michael Kohler Arts Center in Sheboygan, WI. Her work is in numerous private and public collections including The Center for Photography in Woodstock, NY and the Albany Institute of History and Art. Ms. Kreisher lives in Schenevus, NY.

Alex O’Neal’s drawings and paintings depict dysfunction, style as empowerment, nature worship, anarchy, Hollywood. The community in his work finds a vehicle in fictional Delta City. Originally from Mississippi and a Cooperstown resident since 2013, Alex O'Neal graduated from Rhode Island School of Design and the School of the Art Institute of Chicago. His formal education overlapped regular visits with Mississippi self-taught artists, including Mary T. Smith and Son Ford Thomas. He has received fellowships from the Guggenheim Foundation, New York Foundation for the Arts, and National Endowment for the Arts. His work is represented by Linda Warren Projects, Chicago.

Glimmerglass Film Days is made possible with public funds from the Chenango Arts Council’s Decentralization Program, a re-grant program of the NYS Council on the Arts, with support from Governor Cuomo and the NYS Legislature.