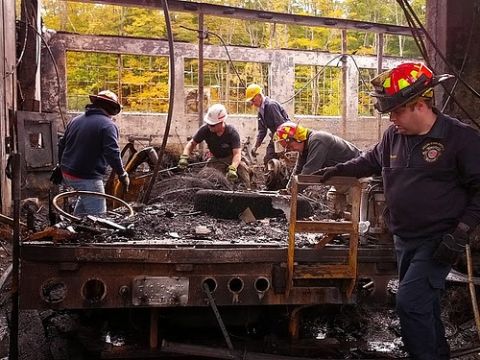 Above: Investigators comb through the rubble at Becker's Tire Service, a longtime Grand Gorge business destroyed by fire on Friday, September 27. Photo by Lissa Harris.

In the last month, two beloved businesses in Grand Gorge were destroyed by fire: first Becker's Tire Service on Route 30, on Friday, September 27, then Sundae's on Route 23 on Monday, October 14, just a few weeks later.

At first, neither fire was considered suspicious. But after reviewing the evidence, Delaware County police believe that the fires may have been intentionally set.

Undersheriff Craig DuMond told the Watershed Post that neither fire has been officially found to be caused by arson, but that police are investigating the possibility.

"At this point, the only thing our investigators want to say is that the fires have been deemed suspicious," DuMond said.

Delaware County police are asking for the public's help for information that could help with the investigation. A third fire, set in a leaf pile, was discovered by patrolling New York City Department of Environmental Protection officers on Wednesday, October 16 on Intake Road in Grand Gorge. The third fire could yield a clue: A small faded black or primer gray pickup truck was seen on the road, shortly before the fire was discovered.

County sheriff's investigators and DEP police are trying to identify the vehicle, DuMond said. Anyone with information about any of the fires is asked to call the Delaware County Sheriff's Office Criminal Investigation Division at 607-746-2336.

In a press release announcing the call for information on the fires, which was issued last week, the Sheriff's Office also announced the arrest of a 25-year-old Grand Gorge man. James Hartley Jr. was arrested on Friday, October 18 in connection with an attempted break-in at the Otsego Northern Catskills BOCES on Jump Brook Road that occurred on Monday, October 14.

Hartley, who was charged with third-degree attempted criminal trespass, was remanded to the Delaware County Jail in lieu of $1,000 cash bail. Because of a parole violation warrant issued for Hartley after his arrest, he will not be released on bail.

DuMond said that Hartley has not been charged in connection with the fires.